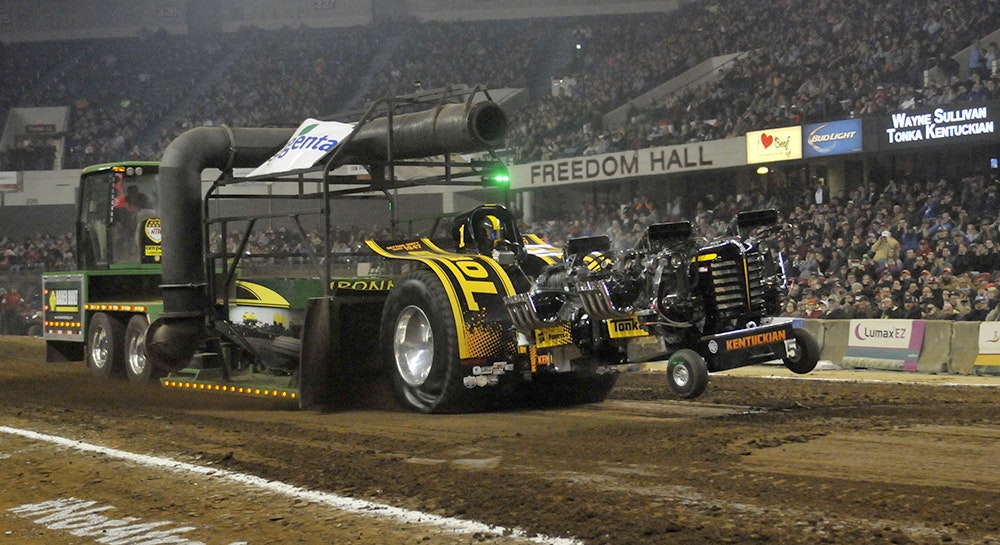 To celebrate 50 years of the Championship Tractor Pull, we asked Wayne Sullivan to tell his story, since he’s been behind the wheel for 45 of those years.

How long have you been competing at the Championship Tractor Pull?
First time I pulled here was in 1973. So I guess it’s been 45 years.  First couple of pulls they didn’t have modified classes and that’s what I pulled in. The 2WD trucks have been there for 35 years and the Sullivan family has been there for every one. My family won 13 years in two different classes – 2WD and modified tractors. It’s been a long time and we’ve had a lot of fun.

How did you get into tractor pulling?
In my early 20s I started drag racing. I had a pro stock car back then. I saw a tractor pull and it amazed me because I was born and raised on a farm. I just had to have one.

What have you seen change in the past 45 years?
One thing that hasn’t changed is the dirt. It’s some of the best dirt you will ever find to have a tractor pull with. They’ve been lucky to have that. They realized how good of dirt they had years ago and put it in a barn.

What’s your favorite Championship Tractor Pull memory?
The first time I ever won was in 1977. We came home, my wife and I talked all night long about what I just did.  We never slept. We just talked about me winning. Then got up in the morning and went to work. Being at the age I’m getting, 2015 was pretty great too because I’m getting to a point in life where you don’t know how many times you’re going to get to do things.

What do you think the future holds for tractor pulling?
Anybody who’s never experienced it, it’s such an experience to do this. It’s such a great thing in the pulling world to be in Louisville. It’s the best of the best indoor pulls.  The sport has really grown tremendously in my lifetime.  I don’t think it’s ever going to stop growing because it’s such a down to earth motorsport.

Anything else?
I could sit here and tell you stories all day long. It’s a great adventure down there. I’ve made more friends in my lifetime because of tractor pulling all over the United States and Europe.

If you stop by The Pit sponsored by Mycogen Seeds look for the Kentuckian and ask Wayne Sullivan to tell some of his other stories. And if you’re watching in Freedom Hall, he’s pulling in the 7,500lb. Modified Class on Wednesday night.

For more information about the Championship Tractor Pull, click here.