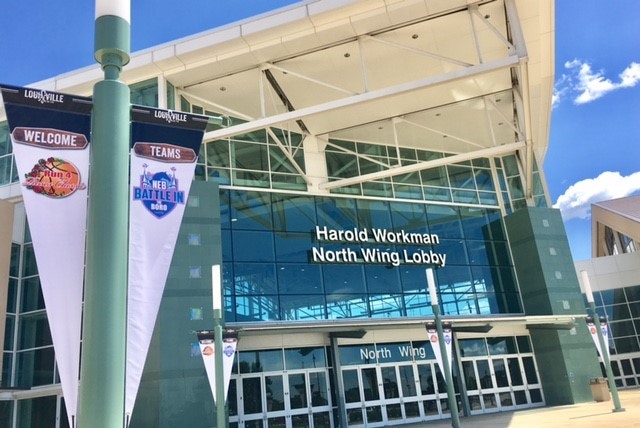 Two national girls basketball tournaments – Run for the Roses and Battle in the Boro – take to the courts in July at the Kentucky Exposition Center, with more than 1,200 teams competing. The tournaments are expected to draw 17,000 attendees and participants, and more than 1,000 college recruiters and 100 national media outlets.

Tournament divisions span grades 8 through 11, with players representing states across the country, from California to Massachusetts and Florida to Minnesota, with a number of teams hailing from Canada.

Previously held in Lexington and Nashville, the tournaments relocated to Louisville because of the Kentucky Exposition Center’s expansive court space. Other deciding factors included amenities such as the proximity of Kentucky Kingdom and affordable hotel rooms. The tournaments’ five-year contracts with the Kentucky Exposition Center extend through 2021, and are estimated to bring $38.5 million in economic impact to the region.

Run for the Roses and Battle in the Boro are participants in the “I Am Ali” festival, which began on the one-year anniversary of Muhammad Ali’s passing and celebrates his life and legacy, June 3 to July 15.

Run for the Roses

More information and a schedule of game times at www.nationalexposurebball.com/run-for-the-roses.

Battle in the Boro

More information and a schedule of game times at www.nationalexposurebball.com/battle-in-the-boro-1.

Passes for both tournaments are available at the door. Cash, checks and credit cards are accepted.

The Kentucky Exposition Center hosts more than 30 youth sporting events annually – including volleyball, archery, cheer and dance, martial arts and BMX – and continues to grow as a youth sports destination. To learn more about the facility or check its calendar of events, visit www.kyexpo.org.