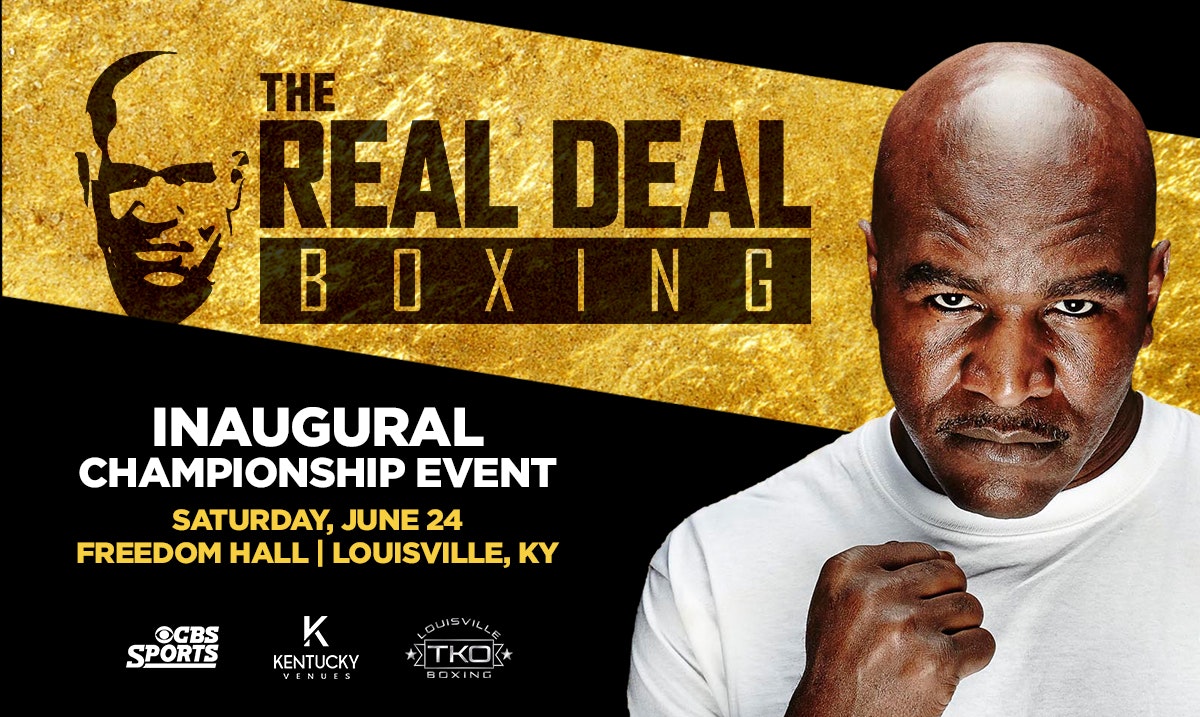 Four-time heavyweight champion Evander Holyfield and his company Real Deal Sports & Entertainment announced today that he will kick off his Real Deal Championship Boxing series June 24 at Freedom Hall in Louisville in partnership with locally based Top Knotch Boxing and Kentucky Venues.

The undercard at Freedom Hall will consist of three amateur and eight professional bouts, including local boxers. Participants in the main card and the undercard will be announced within the next 10 days.

The first installment of the Real Deal Championship Boxing series will be branded “Evander’s Tribute to Ali” with the main bout a CBS Sports Spectacular Broadcast Event that will air live from 10 p.m. – 12 a.m. The fight card will be part of the locally based “I Am Ali” Festival, a six-week celebration of the one-year anniversary of Muhammad Ali’s passing and his global impact and legacy.

“I’m proud to bring the Real Deal Championship Boxing inaugural event to Louisville, and especially pleased to have it take place during the “I Am Ali” Festival,” said Evander Holyfield. “I share many of the same principles as Ali, and this event allows me to pay tribute to his legacy.”

“Ali was an inspiration to me as I started my professional career; the integrity and sportsmanship this event brings to the sport of boxing is one way I can give back to fighters to help them succeed – in the ring and in life,” Holyfield continued.

“We are thrilled to welcome Evander Holyfield and Real Deal Sports & Entertainment to Kentucky for this exciting championship bout,” said Governor Matt Bevin. “Our state has a rich boxing heritage, and we have worked hard in recent months to cut red tape and remove unnecessary bureaucracy hampering the industry. As a result, Kentucky is able to once again host large scale, combat sports events. We anticipate that this will be the first of many to come and are grateful to Real Deal Sports & Entertainment for their vote of confidence.”

The CBS Sports broadcast of the fights will open with a tribute to Muhammad Ali, which will be hosted by Holyfield and narrated by CBS Sports commentator Benny Ricardo.

“Louisville loves sports, and we love to win,” said Louisville Mayor Greg Fischer. “This event is a big win for our city, and another chance for us to welcome folks from around the nation and the world to the hometown of Muhammad Ali.”

The most-recent professional boxing event held in Freedom Hall was on July 30, 2004, when a relative unknown from England named Danny Williams shocked Mike Tyson by stopping him in the fourth round. Among fights on the undercard that night, Laila Ali, daughter of Muhammad Ali, kept her I.W.B.F. super-middleweight title with a ninth-round technical knockout against Monica Nuñez.

“Freedom Hall is a major venue in boxing history, starting with Muhammad Ali’s professional debut in 1960 through Jimmy Ellis’ fight in 1967 and Mike Tyson’s defeat in 2004,” said Jason Rittenberry, president and CEO of Kentucky Venues. “We are very proud and excited to partner with Evander Holyfield’s Real Deal Promotions and Joe Reeves’ Top Knotch Boxing to bring the next generation of champion boxers to Freedom Hall and to the world.”

“I’m thrilled to be able to play a role in bringing championship-level boxing back to Louisville,” said Joe Reeves, founding partner of Top Knotch Boxing and board member of Louisville TKO, one of two beneficiaries of the event. “Louisville TKO strives every day to empower young men and women to build positive futures by offering a structured boxing program, positive reinforcement, academic support, and connection to the community. This event allows us to continue this focus on youth development.”

“Evander’s Tribute to Ali” takes place during the week of the “I Am Ali” Festival that highlights Muhammad’s core value of respect.

“Since losing The Champ in June, there has been a renewed interest in Muhammad Ali’s life from the community and the world. His work, both in and out of the ring, truly exemplifies why he earned the title of the “Greatest of All Time,” said Muhammad Ali Center President and CEO Donald Lassere. “It is appropriate to bring back championship-level boxing to Muhammad’s hometown of Louisville, Ky, where his professional career was launched. We’re excited to host it as part of the community-wide “I Am Ali” Festival, running June 3-July 15, which will celebrate Ali’s life and legacy.”

Part of the proceeds from the event will be donated to Louisville TKO and the Muhammad Ali Center to help support youth development activities in the Louisville area.
“Experience and history tell us that sports often change the lives of young people for the better,” said Karl Schmitt, Jr., president and CEO of the Louisville Sports Commission. “Boxing provided Muhammad Ali the opportunity of a lifetime, and we especially are thrilled to help bring championship-level boxing back to Louisville to benefit two worthwhile causes.”